The hotel in 2030: How personalised needs and new technologies are changing the hospitality business

An excerpt from ‘From Oberoi To Oyo,’ by Chitra Narayanan.

If the Hyperloop – ultra-fast transportation that zips you to a city and back in next to no time – is a reality, will there be such a need to stay in hotels on business? Work on the Hyperloop is speeding up and the futuristic transport solution could be a reality sooner than we think. You could take a business trip and return the same day.

Will there be only leisure hotels then?

That’s clearly not a scenario that hoteliers want to think about, though they are thinking a lot about the future. The point one is trying to make is that disruption is coming from not just within the industry, but from seemingly unrelated innovations. Every new pathbreaking technology could impact hotels in some way or the other.

As far back as 2014, Phil McAveety, chief brand officer of Starwood Hotels – this was before the merger with Marriott – had painted a scenario where a guest would send a 3D print scan of his shoes and the hotel would have gym shoes of the exact size ready and waiting in the room when he checks in.

The other trends he outlined, including checking into a hotel through a smartwatch, sending voice-activated requests for car pick-up, and robots as valets, are all a reality already. At the St Regis Hotel in New York, as you brush your teeth you could press a remote and the mirror in the bathroom turns into a television. At an Aloft hotel in Cupertino, you might be served tea by a robot butler quaintly named Botlr.

At the Starwood Experience Centre in Stamford, Connecticut, where the hotel chain creates mock-up rooms for all its brands, you get a sense of some of the changes happening inside hotels. At the Aloft mock-up room, for instance, there is no television but a projector on top of the bed and a smartphone dock at the bedside. The guest of the future will be bringing his own entertainment is what the chain anticipated, and this could change the room interiors.

Apps in the hands of travellers allow them to directly communicate with front desk, housekeeping and concierge staff. Nakul Anand, executive director, ITC, felt that travellers will increasingly want to be in control, and hotels have to hand this over. So typically, many of the services you would ring for will all migrate to within the room.

Technology is clearly one of the biggest drivers of change in the hotel experience today. “Companies that don’t embrace technology as an enabler will disappear,” said Dilip Puri. Artificial Intelligence will allow guest experience to become so much better. Chatbots are already making the booking experience easier.

All trends point to the latest kid on the technology block, blockchain, disrupting the hotel industry. Blockchain is a growing list of linked digital records using cryptography that has already begun to change thinking about online distribution of hotel rooms.

Currently, all hotels depend a great deal on OTAs that use technology to connect consumers with hotel chains. Every hotel has to invest in technology – booking engines, property management systems and channel managers – to connect to the OTA system. In a blockchain-based system, hotels can use any device to connect directly to a blockchain and there on to consumers eliminating expensive OTAs. It is a distribution landscape that is very creative. And it could especially benefit smaller hotels. Google and Amazon could get into this technology. Several blockchain-based platforms have come up and early movers like CitizenM Hotels have logged on to it.

Technology is also going to impact operations – the way hotels source their supplies, for instance. Currently, many hotels stock 30 per cent extra inventory of some supplies, keeping in mind damage and theft. What if there comes a time when there is a way to do everything in real time?

But there are other trends too shaping the future of hospitality. As Frits Van Paaschen, the former head of Starwood, author of the thought-provoking book The Disruptor’s Feast, pointed out, the consumer could be a disruptor.

Consumer profiles, tastes, needs, expectations are all changing. Every hotel chain from Marriott and InterContinental to Taj and ITC is studying the changing consumer and new guest expectations, and beginning to redo their services accordingly. But the trick is in getting the trends right, and also time the changes to services correctly to catch it at the exact moment.

Bits and pieces of what these changes are going to be in consumer profile is already available. A study by the InterContinental Group finds that the big travellers of tomorrow are going to be from different places. More travellers will originate from emerging economies like Brazil, Russia, China, India and parts of Asia. These new global explorers have very different needs from American and European travellers, and hotels will need to gear accordingly.

That’s why IHG has introduced HUALUXE Hotels & Resorts, a hotel brand designed by Chinese for the Chinese within its portfolio. Others like Accor are adapting their offerings too – Accor’s Grand Mercure Mei Jue brand focuses on the Chinese traveller’s expectations. According to Jean Michel Cassé, it is a matter of time before a hotel tailor-made for Indian guests comes up.

MICE (meetings incentives conferences and exhibitions) is another big trend impacting growth of hotels. Globally, MICE is an $808 billion industry. India currently has only 0.5 per cent share of this but a series of moves by the Indian government, including opening up discounted conference visas to the private sector, could lead to a surge in events being held here.

According to the ICCA (International Congress and Convention Association), which did a study on where meetings were conducted, the biggest share of venues went to hotels. Despite the growth of video conferencing and virtual meetings, there has been no reduction in the volume of conferences – so that’s an opportunity area.

The big fat Indian wedding is a big opportunity area for hotels. Even a flower delivery start-up like Ferns n Petals has realised the potential in weddings and created two “wedding hotels” – Udman and The Opulent – in Delhi, designed and sold mainly for marriages.

Additionally, according to figures from the US Inland Revenue Department, the trends are the growth in women travellers (30 per cent of Chinese millionaires are women, while in the US there are now more female millionaires aged 18-44 than male) so expect rooms specially designed with a feminine touch for women guests. As companies go for massive gender diversity programmes, with targets of having at least 30 per cent of their employees as women, more business travellers could be women.

The millennial cohort is a demographic that has already altered many a hotel’s offering. Shared spaces and community activities are all geared towards millennial guests. But Gen Z – those born in the mid-1990s to early-noughties – is rising and that’s another cohort with a very different personality. At the same time you can’t leave out older guests’ preferences so hotels will have to balance all their offerings to cater to many generations.

Another growing set of consumers is the woke brigade – guests who passionately care for environment, are worried about climate change, are activistic in nature and will stay only in places where everything is ethically sourced or made. Witness the way Marriott has already committed to reduce plastic usage in its hotels.

You can get the consumer grouped and bunched in cohorts – from a geography or a particular generation or gender – but within these groups, each consumer is still unique. Rising individuality is a big trend and hotels will have to cater to each guest differently.

The more agile hotels have already appointed heads of personalisation. Marriott, for instance, has a VP personalisation. At the Adobe Summit in Las Vegas, a session was devoted to personalisation at hotels. Melissa Lemberg, global partner, IBM Interactive Experience, described here how IBM’s Watson understands different types of data and has the ability to draw a personality trait of a customer. IBM Watson coupled with the Adobe Experience Manager allows hotels to do extreme personalisation.

How it works is that by trawling through social feeds (Twitter, Instagram, Facebook and so on) as well as a host of available data on the web, the personality graph of a customer who is booked to stay is generated. This gives clues to likes and dislikes, taste in books, food and attitudes. So a proactive hotel could add shows and movies the guest likes to the TV in her room and delight her.

Besides this, hotels will have to do away with rigid 2 pm check-in norms and do personalised 24-hour flexible check-ins, get the bed and pillow preferences right, breakfast choices anticipated, temperature setting in rooms at the exact level the consumer wants, and so on. Many of these are already being done, but it will get to a really intense level.

There are websites that allow you to book a room for just four hours – soon you could book rooms for just an hour. This could totally disrupt hotel operations for how do you manage housekeeping schedules, then? 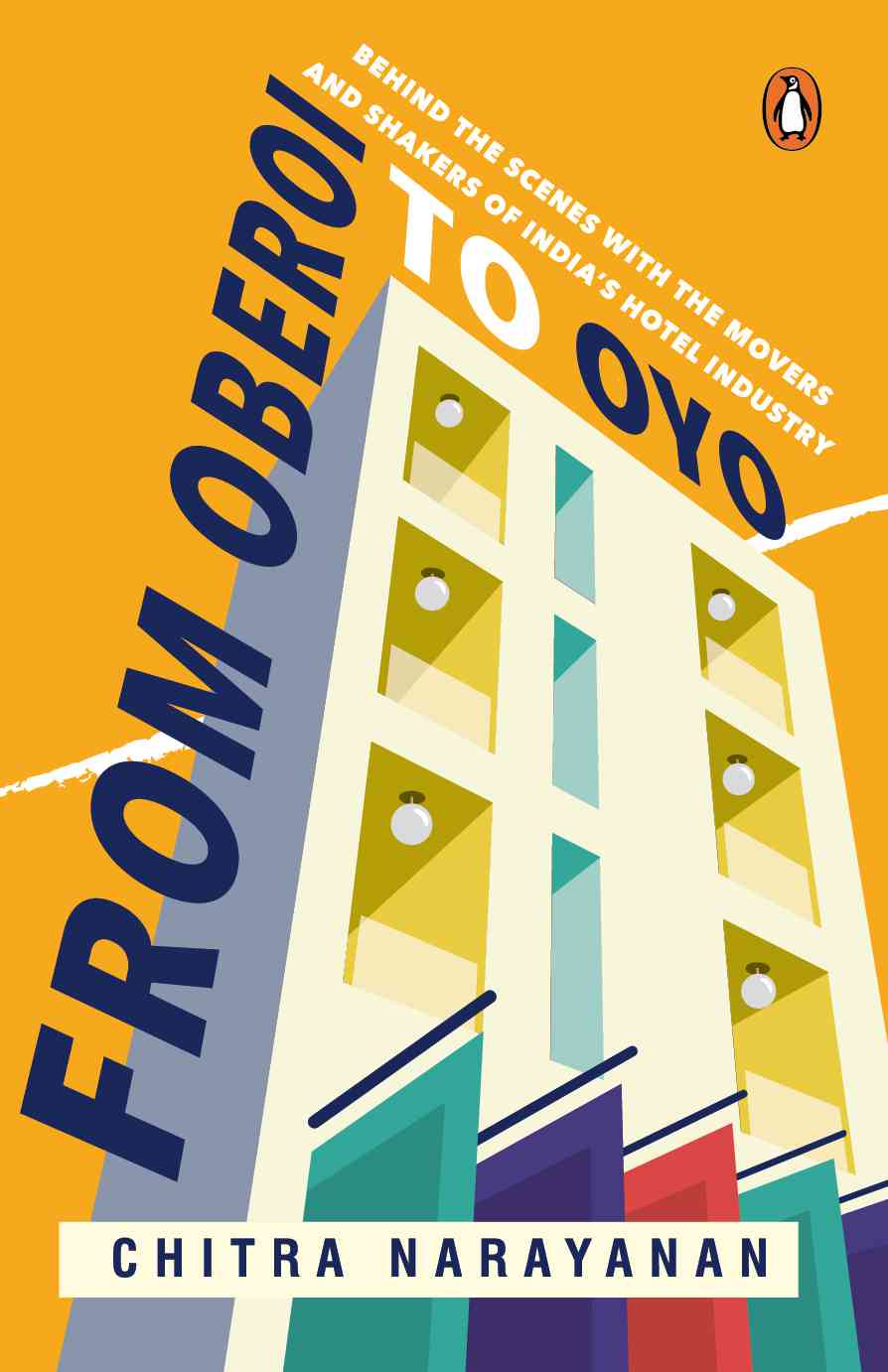 Excerpted with permission from From Oberoi To Oyo: Behind The Scenes With The Movers And Shakers Of India’s Hotel Industry, Chitra Narayanan, Penguin India.