Pukka Phuket: The Thai island might be getting crowded but this swish resort is still an unbeatable family treat

Pukka Phuket: The Thai island might be getting crowded but this swish resort is still an unbeatable family treat

Five minutes, guys!’ booms Wade, kitchen supremo, striding between the cooking stations with exuberant mock outrage and the sort of laugh you’d expect to hear on Mount Olympus on a good day.

Chef hats on, heads down, three young contestants battle it out in the pancake round, oblivious to the fact they are in the most beautiful place on earth. 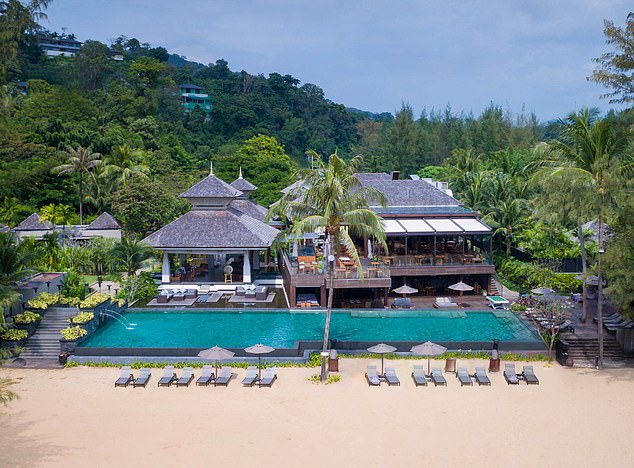 Tranquil: Anantara Layan's pool in Phuket which backs onto the beach

How they could be transfixed by the contents of a frying pan beats me. The view from the hob into the mesmerising blue of the Andaman Sea would make the sainted Mary Berry bin her whisk, grab a pina colada and head straight for the beach.

But not even the lure of Phuket’s Layan Bay — palm trees standing sentinel over perfect sands and calm waters as warm as a bath — can put my lot off the main prize.

Evie, 12, wielding her rolling pin like a cheerleader’s baton, is in danger of knocking herself out.

Rose, 13, glances up from her mixing bowl, a picture of happy perspiration. ‘Best day ever.’

No fewer than five top chefs from Dee Plee, the Anantara Layan’s award-winning Thai restaurant, are at my children’s beck and call in three rounds of competitive cooking.

Deliriously darting between colourful balloons and enough confectionery to fill a sweet shop, they don’t know whether to cook with the ingredients or just scoff them.

Earlier, they had completed the first two stages of the Junior Hotelier programme, an ingenious idea whereby younger guests are given a fascinating insight into the workings of a world-class hotel — complete with their own butler uniforms, chef’s whites and enamel name badges — while their parents sneak off to the spa.

By the end of the morning — and a 90-minute massage that left my head floating somewhere above my shoulders — all three were versed, to varying degrees, in threading crown flowers, jasmine and orchids into delicate welcome bracelets.

And while neither love nor money seems to get them to pick towels up from the floor at home, they can at least now shape them into something resembling elephants and turtles. 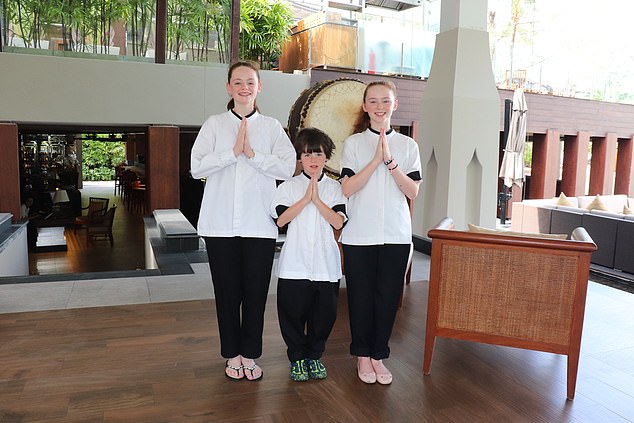 Cooking up a storm: Rose, Felix and Evie in their uniforms

Who knew Phuket, magnet for backpackers and honeymooners, would be such a hit with the kids?

But then the Anantara Layan, where the standard of service verges on telepathy, could satisfy even the most exacting of guests.

No sooner do I squint at the sun from my daybed by the sea than a second parasol appears. Followed by a glass of ice cold water. Followed by a neck, shoulder and hand massage. Followed by a further glass of water, a menu and gentle inquiries as to what madam would like for dinner that evening on the beach. A fluttering white canopy — the sort in wedding magazines, with bridal white chairs and a centrepiece of roses — was being prepared.

It’s not so much a holiday as an out-of-body experience. One where your baffled body thinks: ‘Me? Really?’ Not that it’s a place where you lapse into a blissful coma. There’s too much to do for that.

One minute you’re gloved up in a ring, trying to remember what used to make you angry, in a Muay Thai boxing class and trying not to be startled when your gentle giant of a husband launches into a series of convincing jabs and kicks; the next, clinging to a Seabob — an underwater jet based on Sean Connery’s contraption in Thunderball — and spluttering your way to the surface.

‘We’re off to Felix island,’ shout the children from a kayak, having re-named Koh Kala, the small uninhabited island that overlooks the bay, after the first person to have set foot on it. That morning.

Hours later and his name is still etched into the sand. They all shriek in delight.

This is what it’s all about, you think, as they search for pretty shells while tiny crabs scuttle within inches of their feet. Robinson Crusoe himself couldn’t have chosen a better five-star resort. And, as my daughters point out, the 5G wifi on the hotel’s beach is better than that inside our home.

But then, so is everything else.

Hotel breakfasts are always a treat, but the range here makes our kitchen cupboards look like something from the Eastern Bloc. Ten types of bread. More fruit than I can name. Even the baked beans were infused with bay leaves. 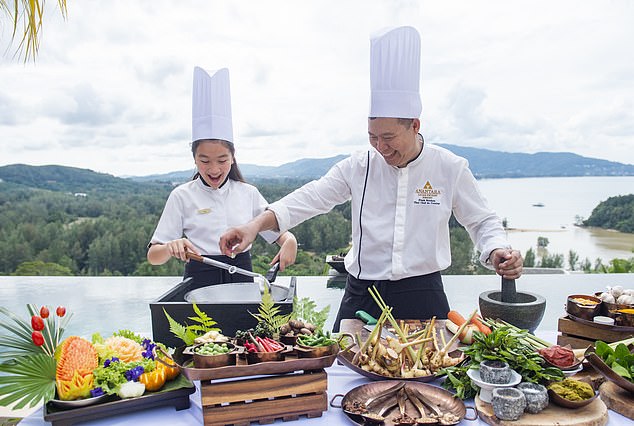 How a boiled egg and builders’ tea sort (milk, two sugars) suddenly finds herself in super-food corner, sprinkling goji berries and bee pollen like some Gwynnie groupie, I cannot say. As for my midlife discovery of green gunk — spirulina shots of ginger, celery and pineapple — I hang my head.

What next? Wellness retreats and moon dust smoothies?

The loveliest hotels always make me want to go home and redecorate, and the Anantara Layan, with its staggering family villas, is no exception. We might not get away with the poolside dragons, but I’m sure I could squeeze a gong in somewhere.

Time to rein in my Eastern ambitions and prepare for re-entry into reality — with a trip out of the resort. We had yet to address the elephant in the room. Namely, we’d been in Thailand for almost a week and had yet to see a real one.

To Phuket Elephant Sanctuary, a retirement home for sick, injured and old elephants, where the care shown to these noble creatures long past their glory was truly humbling.

We fed them, we stroked them, we washed them. Then we did what the British do best — we went to the gift shop, and bought as many elephant-themed clothes as we could. A deafeningly loud suit caught the eye of my son. Row upon row of ceremonial elephants in a riot of red and green.

‘Finally,’ he declared, proudly wearing it with a Panama hat for our starlit dinner that night, ‘I have a good suit.’

And a lifetime of family memories well worth flying to the other side of the world for.

This article has been aggregated from www.dailymail.co.uk and they maybe/are the copyright owners of the same. If you are the Author/Copyright owner of this article and want us to remove the same then send an email to admin@hoteliers.news so that we can delete it immediately. We sincerely regret and apologies for any inconvenience caused to you due to the same. Though it is your decision but please take note that the link to your website and the article have been given above, within and on the bottom of the article.