Thailand's leading resort island Phuket has come face-to-face with the reality that it is tourism high-season will not see a marked reopening to overseas travelers. In...

Thailand's leading resort island Phuket has come face-to-face with the reality that it is tourism high-season will not see a marked reopening to overseas travelers. In the wake of the dismantling of the 'Phuket Model' and refocus by the government on using Bangkok as a single international gateway, there is increasing alarm over the lack of a path forward for the island's rice bowl-tourism.

The key tourism indicator for the island is airlift and Phuket International Airport is the gateway for 70-80% of visitors to the destination. According to Airports of Thailand (AOT) data, 121,530 passengers arrived in the month of September. This equates to just over 4,000 arrivals a day and a portion of these include local residents and business people. Comparing year-on-year data, 2019's daily arrivals which included international travelers was five times higher.

Commenting on the toxic situation, hospitality consulting group C9 Hotelworks Managing Director Bill Barnett says "there is a dramatic change in the market mix where the current domestic-led average length of stay for hotels is approximately 1.8 days, while for foreign travelers it's more than double this amount. What this means for hotels is severely reduced overall demand across the island's entire accommodation sector."

Looking forward to the high season when the numbers spike upwards in the four months of December through March, the high season months last year equated to more than one-third of annual demand. Total domestic and international arrivals at the airport totaled just over 9 million in 2019. Adding in high season shoulder months into the equation, the stark economic impact of Phuket's economic seasonality is reflected in the fact that well over half of the island's tourism arrivals are packed into a six-month period.

Now, nearly two months into that timeframe, what is apparent is it's virtually impossible to save the high season and hotel owners in 2021 will be forced to contend with historically the lowest trading months of the year by May. Given these grim prospects, C9 is predicting large-scale job losses and business closures given there is no light at the end of the pandemic-induced tunnel.

"Taking a 360-degree view on the restricted domestic-only demand, you have to take into account that Phuket's current registered accommodation supply has continued to surge to its present size of 90,267 rooms in 1,773 hotels/tourism establishments" adds Barnett. "Of this supply upper midscale, upscale, and luxury properties of international standards are approximately 25% of the total rooms."Data from leading data intelligence provider STR daily has Phuket occupancy averaging 10% with upward spikes on weekends at international standard hotels. Looking into the number though, the reality is domestic travelers are cashing in on cheap deals at upscale and luxury hotels. Given limited visitor arrivals the far larger mid and economy tiers where most of the hotel inventory sits, are experiencing even lower occupancy. This domino effect is expected to prevail unabated throughout a sustained downturn and effectively crushes the smaller properties and local tourism businesses.

Data from leading data intelligence provider STR daily has Phuket occupancy averaging 10% with upward spikes on weekends at international standard hotels. Looking into the number though, the reality is domestic travelers are cashing in on cheap deals at upscale and luxury hotels. Given limited visitor arrivals the far larger mid and economy tiers where most of the hotel inventory sits, are experiencing even lower occupancy. This domino effect is expected to prevail unabated throughout a sustained downturn and effectively crushes the smaller properties and local tourism businesses.

As Thailand's government policy has maintained Bangkok as the sole entry point for a limited number of travelers from overseas under the Alternative State Quarantine (ASQ) program, a number of hotels in all tiers are operating under the scheme. Hotel performance data for Bangkok from STR is reflecting occupancy just above 25% for international standard hotels, though again in the broader marketplace demand is at considerably lower levels.

In Phuket, many hotels pinned high-season hope on the now-aborted 'Phuket Model' to allow Special Tourist Visa's (STV's) aimed at long-staying visitors, which is logical given the island's legacy winter 'snowbird' market from Northern Europe and Russia. Putting the Alternative Local State Quarantine program at the head of the reopening tourism initiative, 17 Phuket hotels have been approved and 21 applications are under process. Properties who have undertaken both the expense and time in qualifying for the status have been shut-out, given the government's about-face policy of centralizing all overseas arrivals into Bangkok. 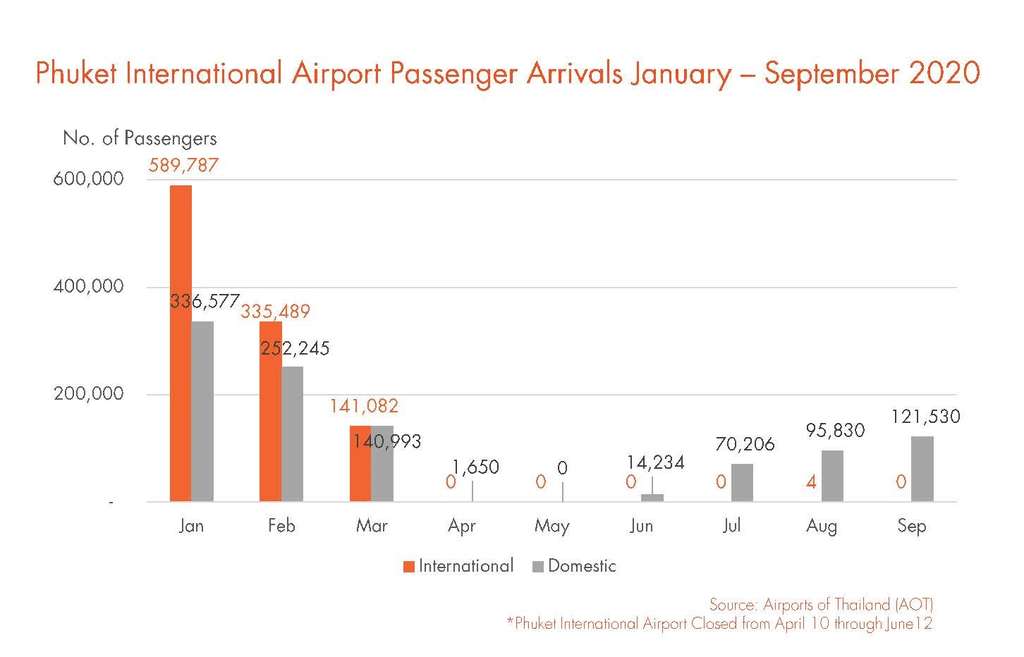 What is unclear is the logic in policy flip-flop on negating the island's essential tourism lifeline. Using smaller contained resort-focused islands would appear a logical risk mitigation strategy that was echoed in all of the hype over the 'Phuket Model' but after the dust has settled, it ultimately failed to launch.

The time has come that Thailand must gain confidence from international benchmarks, such as the tourism dependent Maldives. According to data from the nation's Ministry of Tourism, in October the destination recorded 21,514 tourist arrivals. This trend is again on the rise in November and looking back the country has safely managed the reopening of its borders since mid-July. Another nearby island, namely Singapore is set to put an overseas travel bubble into place within this month to Hong Kong (SAR).

Putting Phuket's economy debacle into perspective C9's Bill Barnett says "losing this high-season will further intensify the catastrophic impact on the island's business owners and the livelihoods of the vast majority of residents. Given the sheer size of the hotel inventory, it cannot survive only on domestic visitors, cheaper airfares, or by adding more public holidays. For Phuket, this high season, faced with the prevailing arithmetic the island can only wait and wonder what comes next."

C9 Hotelworks is led by founder and Managing Director Bill Barnett, who brings over 30 years' experience in the Asian hospitality and real estate sectors. Prior to founding C9 in 2003, Bill held senior executive roles in hotel operations, development and asset management. He is considered to be a leading global authority on hotel residences, and has sat at almost every seat around the hospitality and real estate table. Bill promotes industry insight through regular conference presentations at key events and contributes to numerous industry publications. For more information contact www.c9hotelworks.com

This article has been aggregated from www.hospitalitynet.org and they maybe/are the copyright owners of the same. If you are the Author/Copyright owner of this article and want us to remove the same then send an email to admin@hoteliers.news so that we can delete it immediately. We sincerely regret and apologies for any inconvenience caused to you due to the same. Though it is your decision but please take note that the link to your website and the article have been given above, within and on the bottom of the article.