PLANS to open a boutique hotel in the centre of Stroud have come to light. There are proposals to develop the upper floors of the Imperial Hotel into a boutique hotel...

There are proposals to develop the upper floors of the Imperial Hotel into a boutique hotel with 25 rooms.

The Imperial, which is located next to Stroud railway station, was sold in May and it is not yet known who has bought it.

However, the estate agents who brokered the sale, Davis Coffer Lyons, have revealed the plans for a boutique hotel.

The agents are offering the lower floors of the building - the ground floor with its public house, open space and restaurant - to let, with a 20-year lease.

And in their advertisement for the site, they say "the upper floors are to be developed into a boutique hotel comprising of 25 rooms". 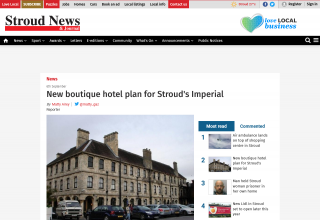 This article has been aggregated from stroudnewsandjournal.co.uk and they maybe/are the copyright owners of the same. If you are the Author/Copyright owner of this article and want us to remove the same then send an email to admin@hoteliers.news so that we can delete it immediately. We sincerely regret and apologies for any inconvenience caused to you due to the same. Though it is your decision but please take note that the link to your website and the article have been given above, within and on the bottom of the article.