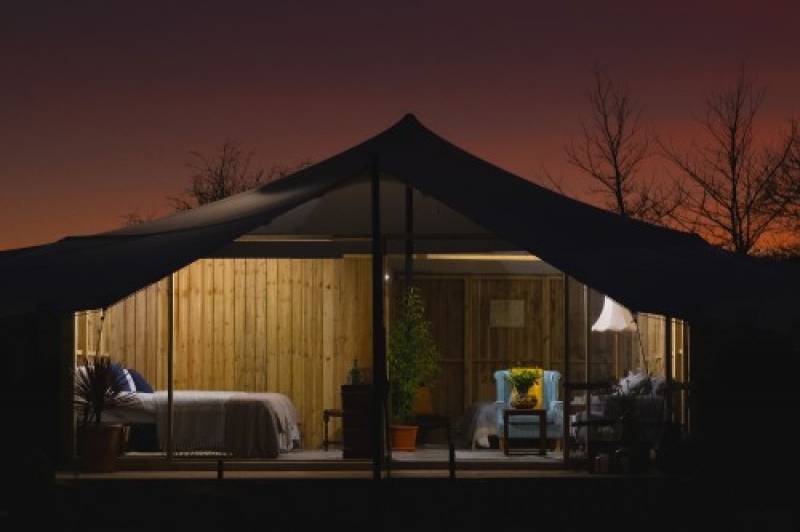 Luxury Family Hotels is to launch a handful of luxury bespoke glamping suites under a new collaboration with The Pop-Up Hotel company from May 24.

The hotel group will unveil eight new glamping pods, usually seen at festivals such as Glastonbury, on the grounds of Woolley Grange hotel near Bradford-on-Avon, with the view to rolling out the concept across other properties in the Luxury Family Hotels collection in the future.

Simon Maguire, Managing Director, Luxury Family Hotels, explains: “We wanted to create a unique guest experience that gave new and returning guests an opportunity to immerse themselves in a stunning location without compromising on the quality of one of our hotel stays. We are delighted that The Pop-Up Hotel has brought our vision of the perfect family glamping experience to life and we can’t wait to welcome our first guests.”

The glamping pods will feature one large master bedroom with a double bed, a second bedroom with two single beds, and both come with access to a private bathroom with a fully functioning toilet, shower and wash basin.

Breakfast will be delivered to the tents each morning, or guests can choose to dine in the hotel’s restaurant instead.

The Hideout Café & Bar is also new for 2021. Situated close to the glamping suites, the pop-up eatery will be open to both residents of the hotel and the tents and will serve food and beverage from 10am.

Menus include homemade pizzas using vegetables from Woolley Grange’s walled garden, soup and salads as well as cakes, cream teas. Different food will then be served at supper each night, from BBQ to paella and curries.

Menus have been designed by the hotel’s new head chef, Dean Westcar, who has joined Woolley Grange Hotel from Lucknam Park in Wiltshire where he was head chef at its Michelin-starred Restaurant Hywel Jones. He also previously headed up one of the chef’s tables at Crockers in Henley.

The Pop-Up Hotel was established in 2010 by founders Mark and Vicky Sorrill.

This article has been aggregated from www.boutiquehotelier.com and they maybe/are the copyright owners of the same. If you are the Author/Copyright owner of this article and want us to remove the same then send an email to admin@hoteliers.news so that we can delete it immediately. We sincerely regret and apologies for any inconvenience caused to you due to the same. Though it is your decision but please take note that the link to your website and the article have been given above, within and on the bottom of the article.