The corner seat is the one to bag. The very same soft, red leather banquette that was Oscar Wilde’s favourite and which gives the best view of the resplendent Rococo room. Opened in 1865, on the Piccadilly end of Regent Street, The Oscar Wilde Lounge is the jewel of Hotel Café Royal, and one of the most historic rooms in one of London’s oldest hotels. 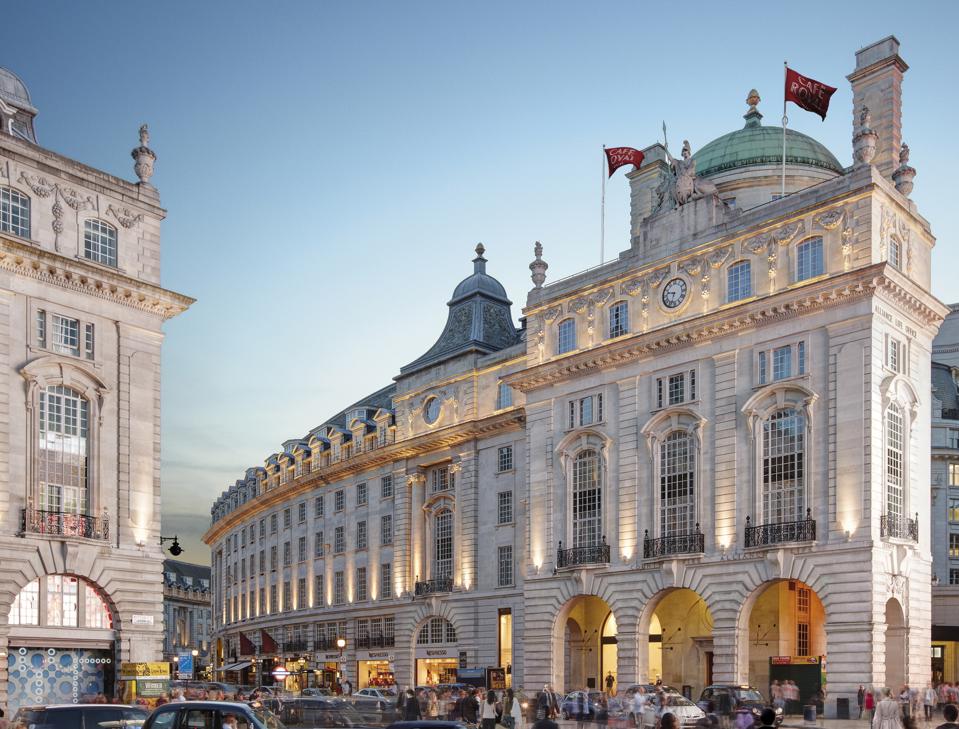 Hotel Cafe Royal is one of London's most iconic hotels.

Once called the Grill Room, it was renamed in honour of one of its most famous visitors (there were many) – Oscar Wilde – who visited daily. It’s also the spot where the writer fell in love with Lord Alfred Douglas. In fact, the room is infused with a sense of classical romance – from the effervescent décor to the tinkling piano against which the new, special Valentine’s edition of its famous afternoon tea is set – this is a place which will not fail to conjure butterflies in your stomach. 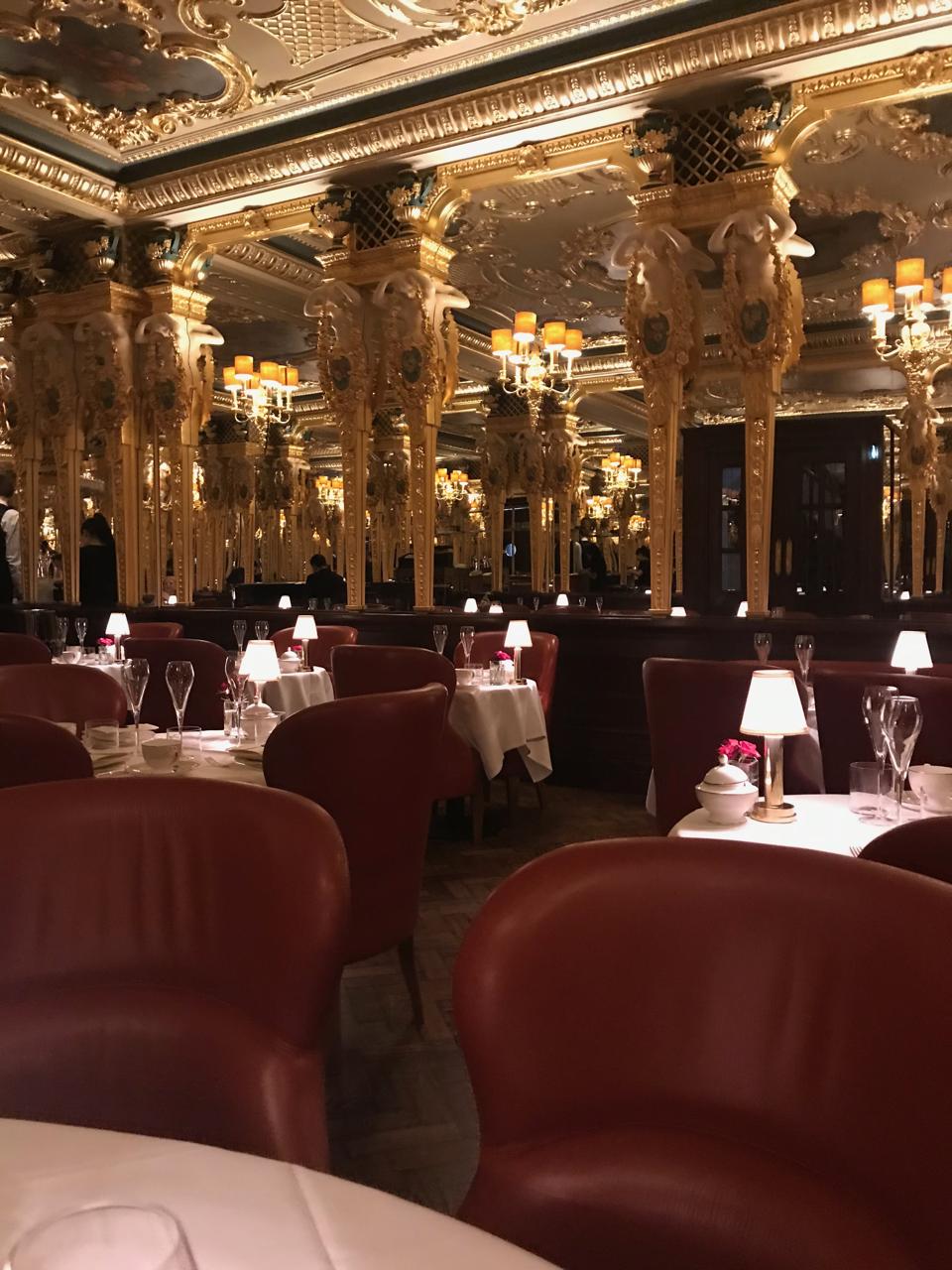 The view from Oscar Wilde's table.

Like sitting inside a jewellery box, the lounge gleams with gilded plasterwork, mirrors and painted ceilings. The special edition of its Queen of Afternoon Teas has been launched for Valentine’s Day – a celebration of love which was made popular during the Victorian age – and will be on offer from 14-16 February. The menu gives a nod to the Victorian era, a time when the meal-between-meals became the height of fashion, with the menu inspired by a variety of dishes, ingredients and techniques, that would have been in fashion during Queen Victoria’s reign.

The entrance to Hotel Cafe Royal.

Hotel Café Royal, of course, is bursting with history. Since it first opened its doors, it has been the original party palace – where David Bowie held Ziggy Stardust’s retirement party and where the likes of Diana, Princess of Wales would come to dine. It is where Aubrey Beardsley debated with Whistler and Mick Jagger, the Beatles and Elizabeth Taylor danced the night away. Back in 2012. it reopened following a five-year renovation project led by David Chipperfield. The aim was to return the tired hotel to the splendour of its heyday but with a modern twist. 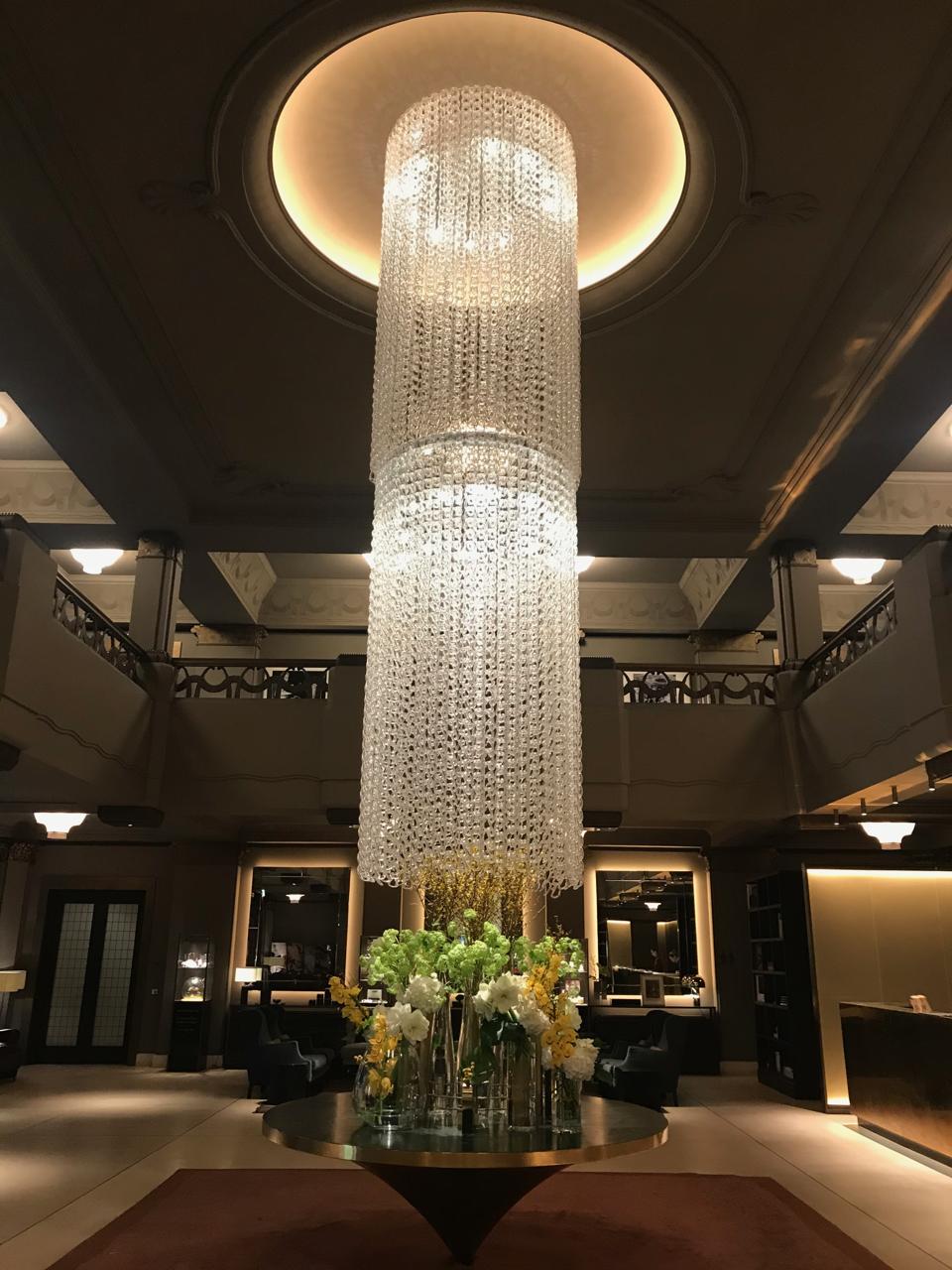 The dramatic chandelier makes a statement in the lobby.

The result of this comes to the fore in the lofty, double-height lobby – which is dominated by a dramatic, cascading and oversized Murano-glass chandelier. Compared to the exuberance of the Oscar Wilde Lounge – this Piero Lissoni-designed space is positively pared back. But look closely, and despite its nod to minimalism, you’ll spot many of the hotel’s original architectural features which have been restored – such as the elegant staircase and the gilt lift doors. 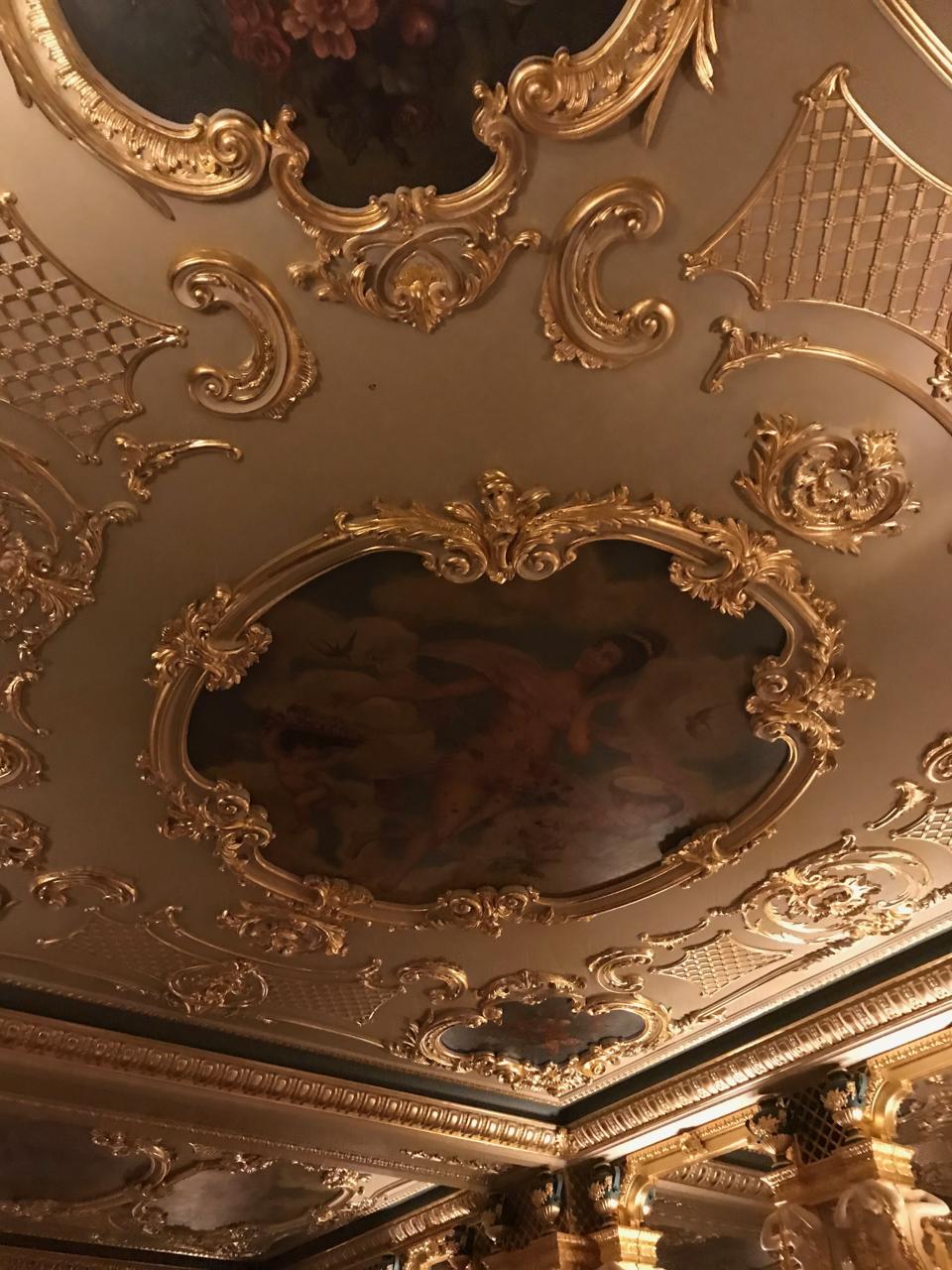 From the urban retreat that is the Akaha Holistic Wellbeing spa, found underneath the hotel, to the serene bedrooms, which feature English oak panels, Portland stone detailing and Carrara marble bathrooms, the hotel has a considered, contemporary feel.

But it is the Oscar Wilde Lounge, which remains the pièce de résistance and where the quintessential English afternoon tea is held. Start with a choice of Champagne or, indeed, one of around 25 tea blends and infusions. A menu, printed on thick, creamy paper, and sealed with a wax stamp, adds to the sense of occasion. The menu also fuses a sense of timelessness with modernity – from the amuse-bouche of pork ballotine truffle and pistachio to the Cheshire cheese and asparagus tart. A dainty selection of sandwiches on gilt-edged plates, each offer a twist on the classic. Cucumber sandwiches, for instance, are heightened with a rose pepper cream cheese. Smoked salmon has a wild fennel crème fraiche, curried chicken is stuffed with golden sultanas and comes on turmeric infused bread, while roast beef has an Albert sauce. 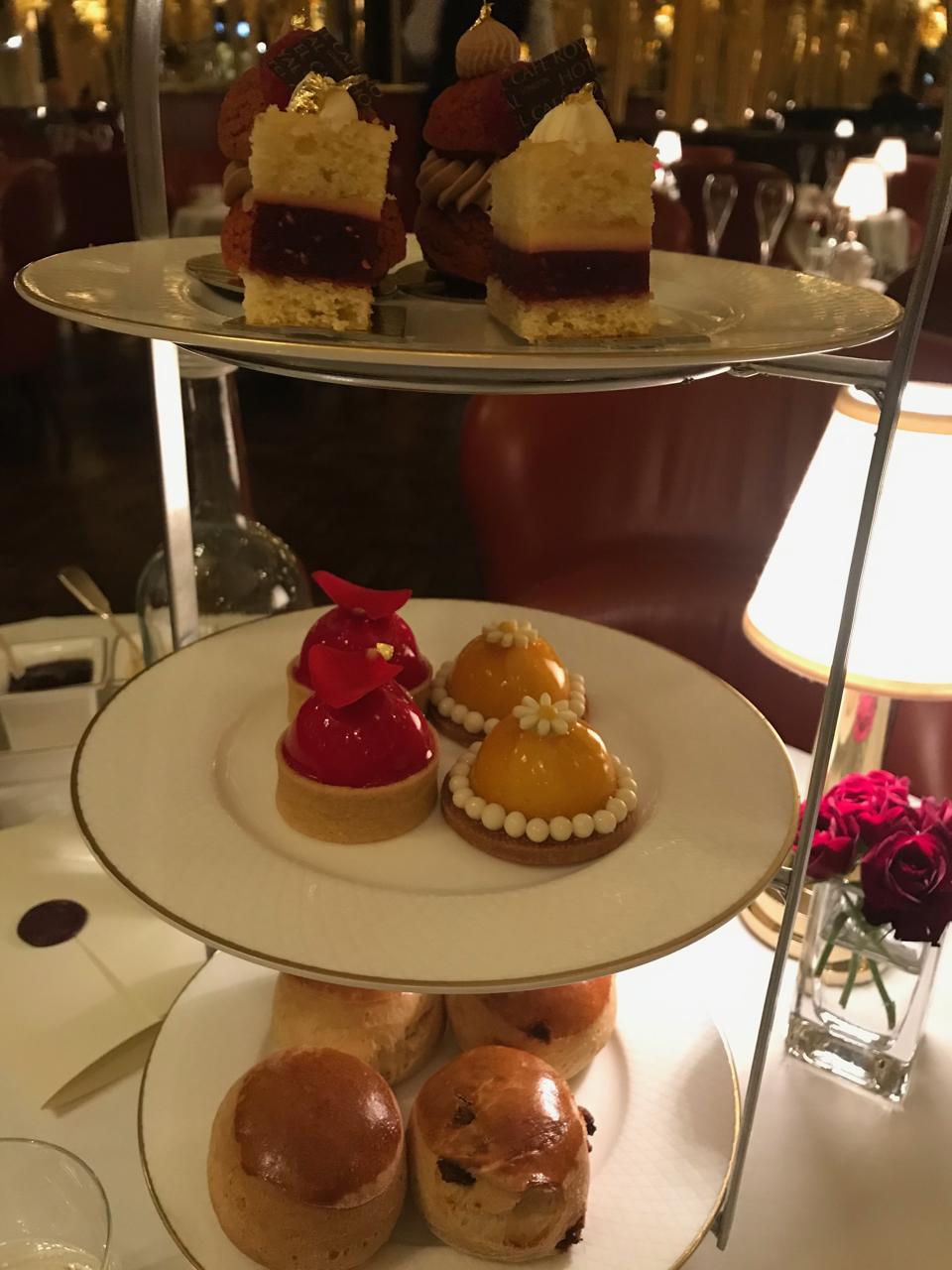 The afternoon tea is inspired by Victorian recipes.

A pretty orange jelly, to cleanse your palate, leads on to the sweet treats, which include the must-have scones with jam and cream. A range of patisserie – such as chocolate choux bun with salted caramel cream, a raspberry Victoria sponge, vanilla and apricot blancmange and rose, raspberry and lychee tart – is impossible to finish, but you should give it your best shot. After all, as Oscar Wilde said: “I can resist everything except temptation.”