The U.S. State Department recently expanded the list of countries it suggests Americans not visit to include 80% of the world, citing their high rates of Covid-19.

The response from many travelers appears to be indifference.

The department's new travel alert system incorporates the CDC's Covid-19 data, vastly expanding its Level 4 list to include many of the places open to Americans. Caribbean islands, Mexico and most of Europe are among the destinations that carry the recommendation that "travelers should avoid all travel to these destinations."

Even Antarctica is on the list "because this country has not reported Covid-19 data and risk is unknown."

But resorts, travel advisors and cruise lines told Travel Weekly that the new advisories did not prompt waves of cancellations or calls of concerns about trips booked to Level 4 locations.

In fact, it seems the content of the travel warnings is outweighed by pent-up demand to travel, confidence inspired by the increased vaccination rates and travel-advisory fatigue.

Jack Richards, CEO of Pleasant Holidays, said that although the advisory "generated numerous calls and questions" from travel advisors and travelers, "bookings in general, and to Mexico and Caribbean in particular, increased since this announcement, with trip cancellations declining week over week."

"We forecast the revisions by the State Department to have no impact on sales or vacation bookings for the remainder of the year," Richards added. "We expect travel demand to continue to increase as more Americans get vaccinated and prepare to travel."

Apple Leisure Group Vacations president Ray Snisky said that the week the warnings were issued, ALG "saw some small increases in cancellations of a point or two. The number is so small it would be hard to exactly pinpoint [what was] due to the announcement, but that likely impacted it.

"With vaccination distribution continuing to grow, our client feedback and market research continues to point to a customer base with pent-up demand to travel and growing in confidence overall," Snisky added.

A spokesperson for Velas Resorts, which has hotels in Mexico, simply said, "We aren't seeing concern from potential guests." And John Long, vice president of sales and business development for Iberostar Hotels and Resorts, said, "The vaccine has given people peace of mind, and the new update by the Department of State has not impacted our forecast."

Cruise lines, meanwhile, are not sailing until summer with U.S. passengers and say consumers and travel advisors know much can change between now and then.

Seabourn, for example, set its first departures for July from Greece and Barbados.

"We anticipate that, with the efforts being undertaken by many governments around the world to help control Covid-19, these advisories may change based upon improvements in the coming months," said spokesman Brian Badura, who added that the line encourages callers with questions about travel advisories to "routinely refer back to the appropriate government websites to ensure they have the most updated, accurate information."

Vaccines may be pushing traveler confidence, but advisory fatigue could also be creating indifference around such warnings.

"Right now, the majority of our clients haven't said a thing about the State Department's warnings and changing the 'level' of threats," said Jennifer Doncsecz, president of VIP Vacations in Bethlehem, Pa. "I think Americans have developed a sense of mistrust for our government's 'warnings' and media hype."

Robert Kwortnik, associate professor of services marketing at Cornell University's School of Hotel Administration, said there are a few things at play when it comes to public dismissal of such advisories.

"It's hard for the average person to make sense of the moving target that is CDC guidance," he said. He cited the example of the CDC saying that fully vaccinated travelers can now travel at low risk to themselves within the U.S. but also classifying the U.S. as a Level 4 Covid-19 destination, "to which it's not safe to travel."

"It's no surprise under these circumstances that travelers might view the State Department's travel recommendations by destination as suspect and confusing," he said.

Another factor, according to Kwortnik, is that because there is so much pent-up demand to travel after being home for more than a year, people are apt to ignore information against doing so.

"If we really want to travel again and possess strong positive attitudes about traveling and about the benefits of being fully vaccinated, we may pay more attention to good news that supports our beliefs and attitude and dismiss bad news that's inconsistent," he said. "So the State Department's new travel alert system is more likely to be dismissed or discounted if the guidance is inconsistent with what people want to believe." 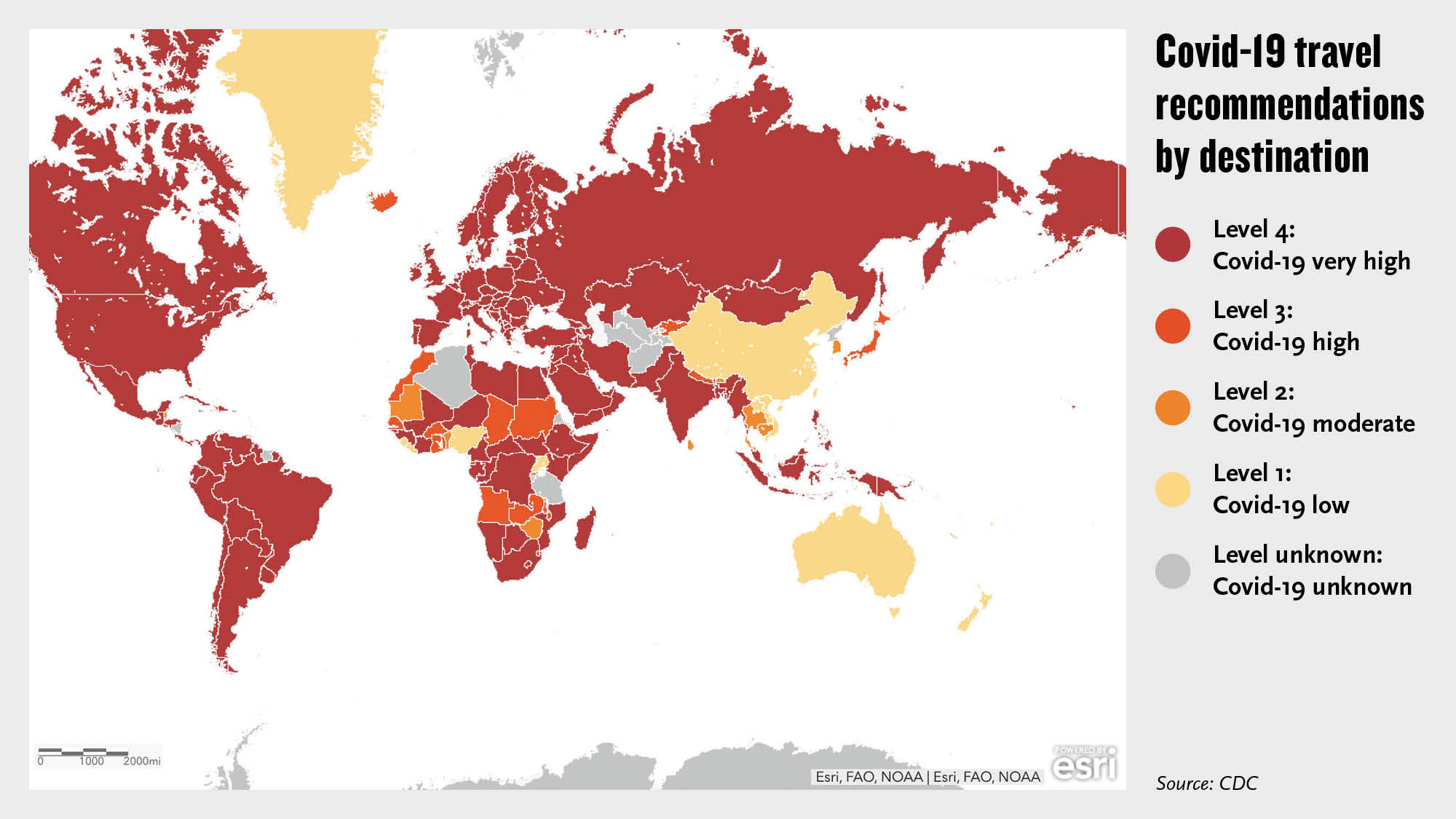