The corpse of a construction worker who died last October in the collapse of the Hard Rock Hotel in New Orleans was visible to the public last week after a tarp placed over the remains blew away. For several days, onlookers took photos of the dangling legs sandwiched between two collapsed floors before firefighters replaced the tarp.

The remains belong to one of the two workers whose bodies have not been recovered due to safety concerns with the collapsed structure. Officials have identified the two men as 36-year-old Quinnyon Wemberly and 63-year-old Jose Ponce Areola. A third victim, 49-year-old Anthony Magrette, was recovered after the accident. 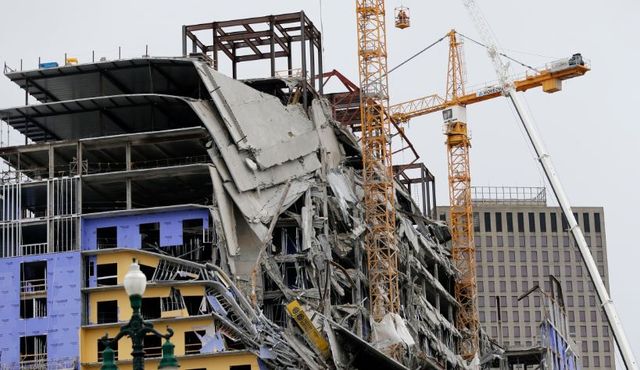 As images of the exposed body spread across social media, New Orleans’s Democratic mayor, LaToya Cantrell, sought to shift blame to the citizenry who were sharing the imagery, posting on Facebook: “To be clear: capturing or sharing images of the victims in such a condition is irresponsible, it is indefensible, and it is not who we are as New Orleanians. Out of respect to the victims and their families, and in the name of basic common decency: we urge news outlets, residents, and social media users to have nothing to do with making a tragic situation needlessly worse.”

New Orleans residents who replied to the mayor’s post were mostly critical. One poster stated, “I fear despite all of your ‘City of Yes’ propaganda you will be remembered as the Mayor who did nothing while a collapsed building and the remains of victims sat there through photo op after photo op.”

Another comment read, “At least you’re able to keep your mind off it, traveling (yet again, and on the people’s dime) to DC Mardi Gras to $bond$ with other politicians. I wonder what the family of the man decaying while hanging over Rampart Street will be doing while you party and schmooze?”

The collapse occurred on the morning of October 12. In addition to the three deaths, an additional 18 workers were hospitalized with injuries.

One of the workers injured and a key witness to the collapse, Delmer Joel Ramirez Palma, was deported by Immigration and Customs Enforcement in November. Ramirez Palma is a plaintiff in a suit filed against the developers and the firms responsible for the project. Shortly after the construction site collapse, he had spoken out to the media about numerous safety violations and shortcuts about which he had previously complained to management.

Video of the incident taken by a pedestrian shows one corner of the top of the structure collapse, pancaking the floors below it and sending a portion of construction equipment and debris falling to the street below.

The construction project was located on the edge of the French Quarter in downtown New Orleans, along the parade route for the Mardi Gras festival, which draws some 1 million tourists to the city each year. Many groups participating in the parade have advocated changing the route, as the structure is not scheduled for demolition until March, after the festival is complete.

It is unclear why demolition has been delayed so long, with some local media speculating that the insurer of the project is still investigating the collapse to determine the pay-out. Though the developer, 1031 Canal Street Developments, is responsible for the cost of the demolition, the City of New Orleans can become liable if they move ahead with demolition in advance of the company’s timeline. Legal analyst Chick Foret told local news station WWL, “The owner is probably sitting back and hoping that the city will take over the project, take over the responsibility from here and then the owner will say, ‘OK, city of New Orleans. You made the decision.’”

The demolition of the structure will cost an estimated $25 million, on top of the $5 million already spent removing disabled cranes that posed an immediate threat to the surrounding area.

In addition to the insurance issues, the builders also need to obtain permission from the city to destroy three adjacent structures that the developer owns but are protected by their status as historic buildings. 1031 Canal Street Developments stands to reap a massive windfall if the old structures are demolished and it is free to build whatever they like on the remaining vacant lot, most likely other large hotels or other similar projects.

On Monday, Kerry Miller, an attorney for the development company, whose majority owner is the Kailas Companies, a large New Orleans-based real estate company, gave an interview to a local radio station in which it denied responsibility for the accident. “1031 Canal LLC, the owner, the majority owner, entities controlled by the Kailas family, are not general contractors, they’re not engineers and they’re not architects. Those are simple, basic facts that people need to be aware of before they jump to conclusions and make accusations.” The company also placed an ad in local papers making the same claim.

The Kailas Companies has a history of corruption, with one member having been sentenced to 30 months in prison in 2013 for defrauding the federal government in connection with a program designed to assist victims of Hurricanes Katrina and Rita. Also contradicting the statement that “1031 Canal LLC…are not general contractors” is the fact that both the general contractor and the electrical contractor are minority partners in the project.

Contribute to the fight for socialism in 2020

2019 has been a year of mass social upheaval. We need you to help the WSWS and ICFI make 2020 the year of international socialist revival. We must expand our work and our influence in the international working class. If you agree, donate today. Thank you.