10 Fantastic Things to Do in Los Angeles

10 Fantastic Things to Do in Los Angeles

Los Angeles is much more than the movie capital of the world. L.A. also has a wide selection of cultural activities, plenty to keep the nature lover busy, and offers some of the best restaurants on the West Coast — and that’s saying something! With a huge variety of happenings and attractions at every turn, your only problem will be how to pick what do first.

You will have your choice of the best L.A. has to offer from the city’s landmark attractions like the Griffith Observatory, Santa Monica Pier, Rodeo Drive, and Universal Studios. How many of the top things to do in Los Angeles will you try? Why not start with these 10 fantastic things to see and do in the City of Angels.

TIP
Get yourself a Los Angeles Card to get free admission into over 35 top attractions and tours. This also includes a pocket guide book and other discounts.

1. Star-gaze at the Griffith Observatory

The Griffith Observatory sits atop a hill on the edge of Griffith Park. This Art Deco landmark dates back to 1935 and is chock full of exhibits. But of course, the planetarium show is the crown jewel. The view from the hill is stunning, especially at night when the city of L.A. twinkles below. To see the stars for yourself, gaze through the telescope on the roof or if you don’t want to stand in line with the crowd, try the smaller telescope on the front lawn. Admission is free. FYI, the observatory is closed on Mondays.

Getting there: Parking is limited and the roads getting in are always crowded, so the best way to get to the observatory is to either take the bus or bike/hike in from Griffith Park. 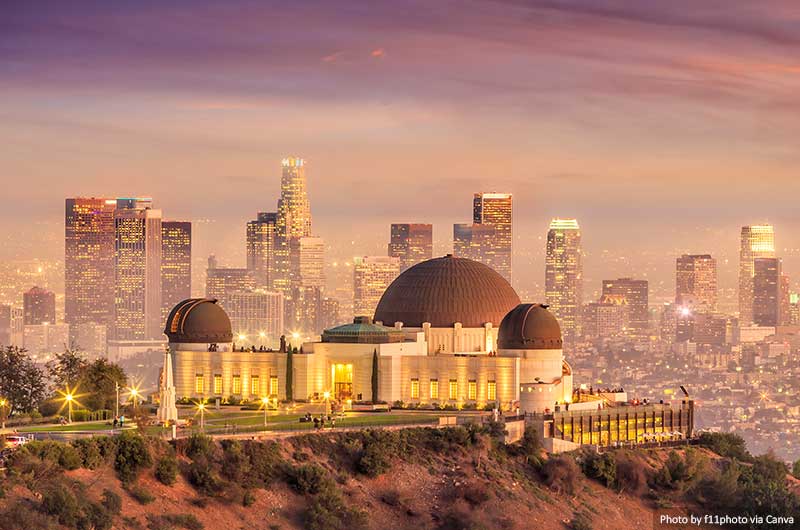 If you want to feel like a kid again, then head to Universal Studios Hollywood. One of the most popular attractions is the Wizarding World of Harry Potter. Hop aboard the Hogwarts Express and experience the thrill of Diagon Alley and Hogsmeade as you sip on some Butterbeer at the Leaky Cauldron. The park is filled with tons of other rides like the Jurassic World ride and Waterworld. Go behind the scenes of a real working movies studio on the Studio Tour. Get to the park early to beat the crowds

3. Catch a performance at the Walt Disney Concert Hall

The Walt Disney Concert Hall is home to the L.A. Philharmonic and is both an architectural masterpiece and one of the most “acoustically sophisticated” concert halls in the world. You’re guaranteed to experience some of the best classical music on the West Coast! The concert hall is the newest addition of the L.A. Music Center, and if you can’t squeeze in one of the concerts, take a free self-guided tour of the plaza.

Getting there: Parking is available directly beneath Walt Disney Concert Hall. Enter on Second Street or Lower Grand Avenue. 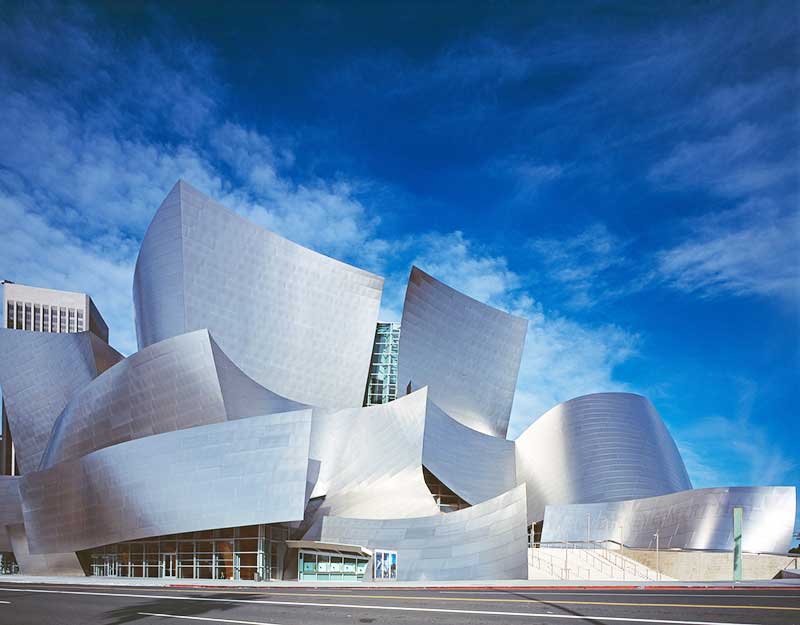 Image by Falkenpost from Pixabay

There’s always something to see along the busy Venice Beach Boardwalk. This 1.5-mile-long, action-packed Los Angeles hotspot brings people from all over to witness some pretty cool outdoor spectacles. The beach is awesome as well, but the real draw for visitors is the fusion of outdoor beach shops, street performers, musicians, and buskers playing to the crowd. Don’t forget to check out the beachside skateparks, bodybuilders working out on Muscle Beach or the beautiful Venice Canals. Admission is free to the public.

Getting there: The Venice Beach Boardwalk is on Ocean Front Walk, just south of the Santa Monica Pier.

Photo by Travis Yewell via Unsplash

5. Get prehistoric at the La Brea Tar Pits

If you need a break from all of the movie star madness, check out the fossils at the La Brea Tar Pits. Here you’ll find some of the world’s most well-preserved fossils. For thousands of years, mammoths, sabre-tooth cats, and other prehistoric mammals were trapped and preserved in the pits of tar that bubbled-up from the ground. This gateway back to the ice age sits right in the heart of L.A. You can get an all-inclusive ticket for $18 during the week ($22 on the weekend). Check out the museum store for replicas of the fossils from the tar pit.

Getting there: The Tar Pits are on Wilshire Blvd, and the museum’s parking lot is located at the corner of Curson Avenue and 6th Street, directly behind the museum. Parking is a flat-rate of $15.

6. Get in the act at a live recording of your favourite show

Whether you are into daytime talk shows, reality competitions, sitcoms, or game shows, being a member of the studio audience is a rite of passage for anyone visiting Los Angeles. The best part—the tickets are usually free! You do have to plan ahead (at least a month) because the tickets go fast. If you are a fan of Ellen, you can get tickets to her show online.

TIP
Click here to see how to get tickets to even more shows.

7. See an original Van Gogh at the Getty Museum

The Getty Museum is a definite must-see destination for art-lovers. They’ve got your Van Gogh’s and Monet’s, but they have so much more to see than art. The Getty has a stunning garden that is a great place to enjoy a picnic with panoramic views of L.A.—especially at sunset. Admission to the Getty is free and is a great place to spend some relaxing time strolling through the gallery and soaking in works of classic art. You can get some serious shopping done at the Getty Store—they have something special for everyone. 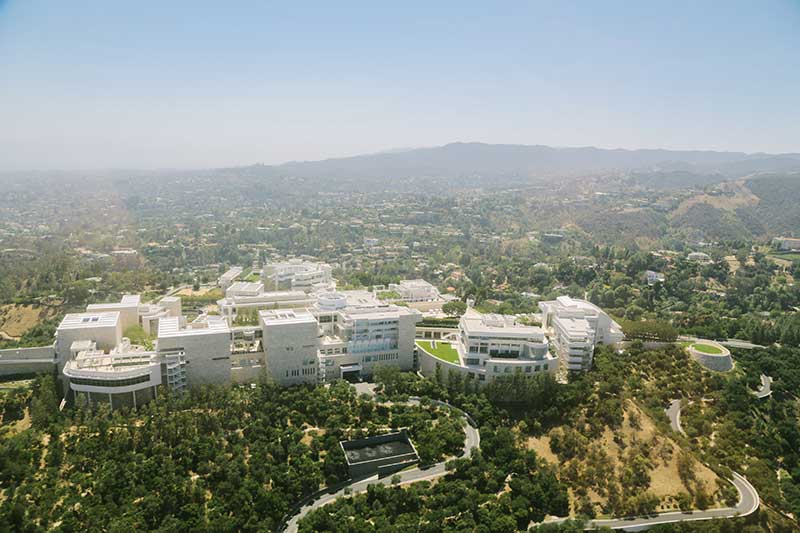 Photo by Joel Muniz via Unsplash

It’s no secret that Beverly Hills is known around the world as one of the swankiest places to shop. Sitting at the heart of it is the fashionable and famous Rodeo Drive. You’ll find more than 100 exclusive stores and hotels in the three-block area called the Golden Triangle. Don’t miss a visit to Two Rodeo Drive, a European-style shopping center complete with a cobblestone walkway. It’s home to the biggest names in fashion Versace, Jimmy Choo, and Tiffany & Co.

Getting there: Rodeo Drive is a three-block stretch of the street north of Wilshire Boulevard and south of Little Santa Monica Boulevard. There is a parking garage located at Two Rodeo Drive, and parking is free for the first two hours.

9. Catch some rays at the Santa Monica Pier

A trip to Los Angeles would not be complete without a trip to the beautiful beaches of SoCal. One of the best ways to see the white sand and clear blue waters of the Pacific Ocean is at Santa Monica. The Santa Monica Pier is a super fun way to both see the beach and have fun. The pier is full of vintage carnival rides and super restaurants. Plus often the sunsets are incredible!

Getting there: The ramp to the pier is at the intersection of Ocean and Colorado. Parking is available on the Pier deck. During the summer, you’ll pay $18 to park all day.

10. See the “stars” on the Hollywood Walk of Fame

Just about every L.A. guidebook will suggest a trip to the Hollywood Walk of Fame where you can pay homage to your favourite celebrities and get a glimpse at the iconic pink cement stars. The epic, Grauman’s Chinese Theater, sadly renamed the TCL Chinese Theater, is really cool and has one of the largest screens in North America. It’s also where blockbuster films hold the stylish red-carpet premieres.

Getting there: The Walk of Fame is at N Highland Ave and Hollywood Blvd. Parking is a real challenge, so the best way to get there is the Metro. The closest station is the Hollywood/Highland Station, a 5-minute walk.

This article has been aggregated from www.travelanddestinations.com and they maybe/are the copyright owners of the same. If you are the Author/Copyright owner of this article and want us to remove the same then send an email to admin@hoteliers.news so that we can delete it immediately. We sincerely regret and apologies for any inconvenience caused to you due to the same. Though it is your decision but please take note that the link to your website and the article have been given above, within and on the bottom of the article.